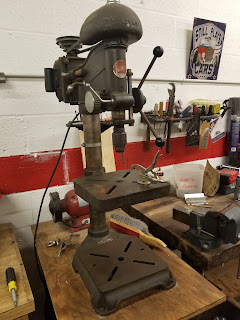 The clockspring for my Atlas No.64 drill press (the spring in the quill) is broken and I need a replacement. So far, I've been unsuccessful in locating one the correct size and would appreciate a lead on one that will fit.

April 03, 2009
Sometimes the most useful things have the oddest names. Take the Franzinator, for instance. Named after Franz©, its curmudgeonly inventor, the Franzinator is a device used to separate moisture from compressed air. Having moisture in compressed air is not a a good thing, especially in painting where it contaminates the painted surface, or in media blasting where it causes the media to clump and not work as well. As well as causing rust in the air tanks and air tools, moisture is best removed. A number of methods have been developed from expensive refrigerated driers used to pre-condition air before it gets to the compressor, to simple mechanical separators that sit in the air line between the tanks and the air tool. Here is a tank that uses a chemical desiccant to dry the air. There are also ways to install the air lines that are intended to either cause moisture to condense or collect before it is sent to the air tool. A non-mechanical separator causes the moisture in the hotte
1 comment
Read more