Sometimes the most useful things have the oddest names. Take the Franzinator, for instance. Named after Franz©, its curmudgeonly inventor, the Franzinator is a device used to separate moisture from compressed air. Having moisture in compressed air is not a a good thing, especially in painting where it contaminates the painted surface, or in media blasting where it causes the media to clump and not work as well. As well as causing rust in the air tanks and air tools, moisture is best removed.

A number of methods have been developed from expensive refrigerated driers used to pre-condition air before it gets to the compressor, to simple mechanical separators that sit in the air line between the tanks and the air tool. Here is a tank that uses a chemical desiccant to dry the air. There are also ways to install the air lines that are intended to either cause moisture to condense or collect before it is sent to the air tool.

A non-mechanical separator causes the moisture in the hotter compressed air to condense when it comes into contact with a colder surface, must like the moisture that forms on the inside of your single-pane windows on a cold winter day.

A common example of this is a section of two- or three-inch black iron pipe assembled in an inverted "J" shape with the compressor line attaching at the bottom of the long leg and the supply line being run horizontally off the short leg. The pipe needs to be run vertically and should be as high as practical, so a 10-foot rise and an two-foot drop would be OK. The problem is that many shops, especially home shops, don't have that kind of overhead room. Here's another approach from woodsy, using a copper coil between the compressor and tank. 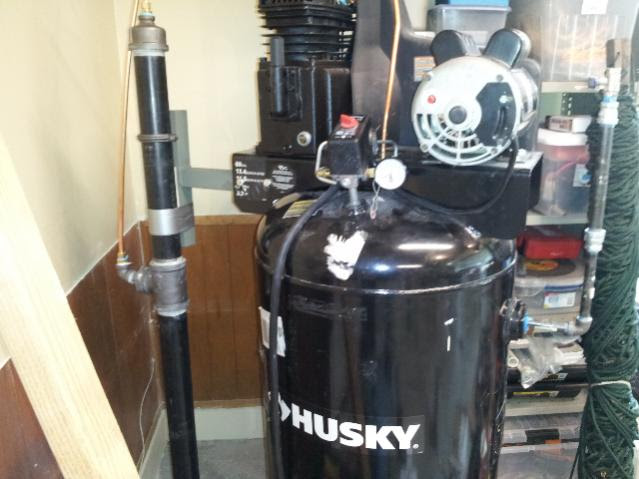 The Franzinator is designed to take advantage of the part of the system that has the highest temperature differential with the environment to achieve the best efficiency. It sits between the compressor and the holding tank and looks like this. Here's the inventor's description of how it works (and here) and here's a diagram to explain it. He feels that it is optimally sized for a 2-1/2 HP compressor and larger compressors should use two or more in parallel.

Here, Franz© elucidates some more on the principle as involved in the Franzinator. He also goes into more detail on the mysteries and secrets of the Franzinator, and discusses active cooling and considers a feed tube through the top versus the side entry.

The original design called for the 90-degree feed tube to be welded in the side of the pipe. Because the Franzinator is a high-pressure vessel, the welds must be done properly; weld failure could be catastrophic and even deadly. Consequently, Franz© developed a non-welded design using JB-Weld (or similar) which is described here , including a materials list.

This fellow built one with slightly changed dimensions, with a picture here. Here's one variant with a coil that allows coolant to be circulated around the Franzinator. Finally, here's a Franzinator built by HossCat.

Does it work? Numerous forum posts attest to it. It looks affordable enough to experiment as long as you feel comfortable doing the fabrication. Or get a friend to do it.

Franz© also has developed an "air polisher" made out of a 20-lb. propane tank and some fittings. I'll post another blog entry when I collect the links for that.


For the Eager Student

Want some more interesting info from Franz©? He has lots of knowledge to share.

O-Ringing the Block and Heads for Higher Compression Engines HOWTO

September 20, 2017
I found some useful advice in this forum thread from user AK's REX. "To my understanding o-ringing the block or the head prove to be about equally effective. That said I would say it depends if you want to have receiver grooves machined. The most conventional method is to machine and o-ring the block, then machine receiver grooves opposite the o-rings in the heads. I guess it can probably be done in reverse fashion as well. As far as the receiver grooves are concerned, it not only helps in high compression and or boosted applications, but helps wet motors from losing fluid which is a common problem with copper head gaskets. It allows the o-ring to literally push the gasket into the receiver groove to provide a better seal. Speaking of copper gaskets here is a bit of info from SCE regarding this stuff; O-ring grooves may be cut in either the block or cylinder head. When using copper head gaskets thinner than .050, O-ring height should be no more than 25% of gasket thickness
Post a Comment
Read more